The best way to determine which sheet rolling machine is best for your application is to explore what various machines can do. A plate roll machine is a piece of equipment that is used to roll various types of sheet metal into round, semi round, round with varying radii or conical shapes. 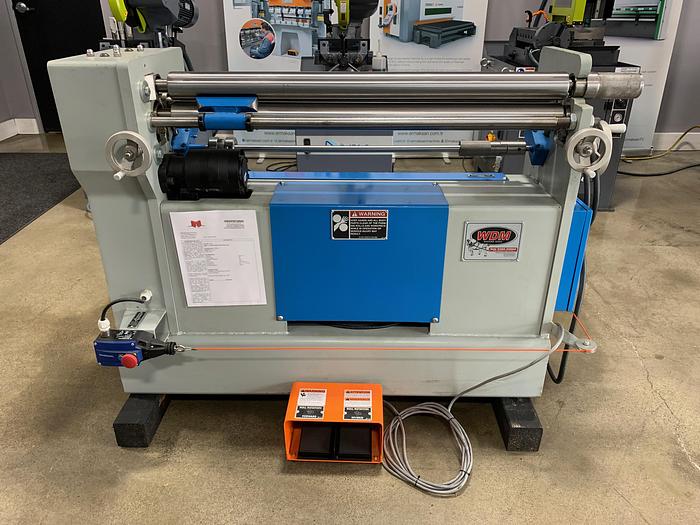 Machine capacity is equally if not more important than style. Plate roll manufacturers commonly rate their machines according to baseline material yield strengths.

Three-roll initial-pinch or single initial-pinch plate rolls generally are for light-capacity applications and may be electromechanical or hydraulic. They work by pinching the flat sheet between two vertically opposed rolls while the third, offset roll—or bending roll—moves upward to contact and then bend the sheet. When rotation of the rollers is activated, the sheet exits at a given radius. With the sheet cut to the developed length and the bending roll properly positioned, the part is rolled into a cylindrical shape that can then be welded at the seam to produce a closed cylinder.

When a cylinder is completely rolled, it is extracted from the top roll. Machines generally are equipped with some type of top roll release mechanism that allows for the cylinder’s extraction. This extraction is accomplished with the help of a forward-tilting or forward-releasing top roll or a removable end yoke.

In most applications, these machines require removal and reinsertion of the sheet to prebend both ends. They are cost-effective but may be more labor-intensive in a production setting than their modern counterparts.

Double-pinch plate rolls are available in light to very heavy capacities and can have three or four rolls. The terminology can be confusing as these units also may be referred to as double-pinch pyramid plate rolls or double-initial-pinch plate rolls. Both three- and four-roll styles have fixed-position top rolls and two offset, or lateral, rolls, one on each side.

The four-roll styles have an additional roller underneath the top roll, which constantly pinches the plate during rolling. Double-pinch rolls can pre-bend both plate ends without removal, as is required with single-pinch rolls.

Three-roll machines generally require pre-bending the leading end, running the sheet through the machine to prebend the trailing end, and then switching roll rotation direction to roll the cylinder body. Four-roll plate rolls have a slight advantage in cycle time because they permit pre-bending of the leading edge, rolling the cylinder body, and finishing off the trailing prebend, all while rolling in the same direction.

Two-roll machines are designed for thin-gauge material rolled to reasonably small diameters. They use a large-diameter, urethane-coated pinch roller that moves up with extreme pressure against a small-diameter steel top roll. A mandrel or drum, very close in OD to the desired ID of the finished part, is fitted over the top roll.

Two-roll sheet rolls are extremely fast and will roll round parts even if the blank has cutouts or holes. Because they require a mandrel for each part diameter and material thickness, they are not as versatile as some other machines, but for dedicated high-speed production, they are often the absolute best choice.

Manufacturing Solutions has a large inventory of new and used fabrication and CNC equipment. Contact us if you have any questions.  We’re here to help.